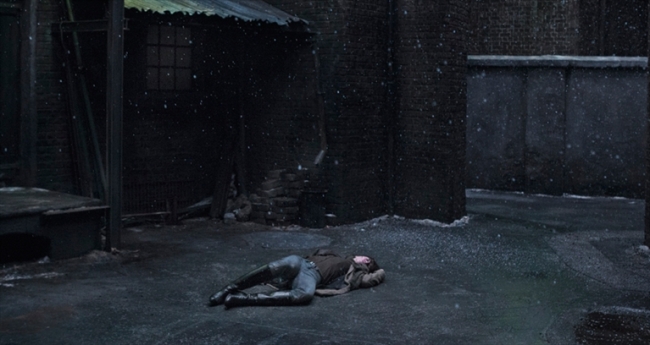 The essential thrill of Lars von Trier’s Nymphomaniac is foreshadowed in the film’s delayed establishing shot, somewhere around the 10-minute mark. Joe (Charlotte Gainsbourg) lies on the cold bricks of a small dark alleyway. Snow falls slowly. Pipes clink. Somewhere nearby, Seligman (Stellan Skarsgard) leaves his apartment to buy milk. The audience is shown his short journey in agonising real time – one insipid step after the other crossing the shadows. On his return trip he finally discovers Joe’s bleeding body and after failing to convince her to be saved through the ordinary channels of police and ambulance, coaxes her to come inside with the promise of tea.

The point of all this – the concentration upon darkness, the snow that falls so slowly it seems almost suspended in the air, the battered body that refuses to give up its place on the pavers – is of course to assert the notion that there is pleasure in abasement. More than pleasure, actually: Joe has crossed a threshold into an extreme of human experience. The film is therefore not about sex addiction as such, but the existential kick of descent. At ground zero of personhood, Joe, stripped of character and dignity, has found a concrete freedom. In many ways Nymphomaniac struck me as an old-fashioned film, especially in von Trier’s awkward soap-boxing against the perils of political correctness and the hypocrisy of the middle-class. This existentialism too, though often finely executed, seemed even more anachronistic than in his other films. But more than in his previous films I felt the singular thrill of visible descent, a sort of recognition from the beginning that says yes, I have seen that bottom of existence.

The only thing that really stuck with me from this film was this establishing shot. On one of my runs a few days later I became preoccupied with finding the best word for this extreme – the place where one lands after the fall, the place at the bottom of it all. I shrugged off: ‘abject,’ ‘debased,’ ‘degraded.’ Showing the way words play before they mean, I strayed into alliterative territory as I got stuck on ‘deranged’ and ‘delirious,’ which really had nothing to do with the word for the deepest depths. I tried ‘deepest’ and ‘depths’ but while they were functional, literal enough, they didn’t resonate – I was trying to find a word that caught something visceral and broken, yet at the same time free. The word for Joe on the pavement in the dark alley. Perhaps, even, the word for the old psychic place, the threshold between eros and thanatos. It was beginning to bother me. I ran faster, as if the word was getting closer but still trying to elude me. I got caught in a trap, a memory trap, where the only word I could think of was ‘inferno.’ This was not the right word. There was no place for heaven and hell in my thinking – despite the backdrop of Christianity-in-Western-art-and-music in von Trier’s film. ‘Inferno’ was not my word, but its raison d’être here was precisely to tease me with its proximity to the word I was searching for. The more I tried to get past this word the larger it became, so that the best I could do was a side-stepping echo-word, ‘vernal.’ In that way that is so typical of the magic of running, the moment I gave up my search was the same moment I: a. realised that I’d nearly run my entire course without raising a sweat or losing my breath; and, b. that the word I sought was from an early modern musical setting for mass.

I kept running. ‘Inferno’ still clouded my vision, obscuring but no longer blocking the word – my word – the perfect word for the lowest extreme of existence. Inwardly, I could see the outline. It had three syllables. It was not an English word. It was a melancholic word. It made me think of water. I could see an ocean. ‘Inferno’ it most definitely was not. I pounced, leaping over a puddle, into: ‘profondo.’ Yes, profondo. Si, profondo. No wonder I kept thinking of inferno – recall Dante: ‘Caccianli il ciel per no esser men belli, ne lo profondo inferno li riceve, ch’alcuna gloria I rei avrebber d’elli’ (Heaven to keep its beauty, cast them out, but even Hell itself would not receive them, for fear the wicked there might glory over them).

But isn’t memory a perverse thing? Because my attempts to find this mass, which I now desperately wanted to hear again, this mass or early opera, as I couldn’t quite decide – were fruitless as I typed ‘profondo’ and other random words I thought would yield a lead: ‘lasciavi me,’ ‘renaissance,’ ‘mass.’ I could hear the music, faintly. I could almost see the text. Something was there. Some dormant part of my memory was stirred by the word.

But profondo? No, non è profondo. I should have known better than looking in the vernacular when the object of the search was a mass. I kept finding references to Dario Argento’s Profondo Rosso. I was more stuck than ever. How the hell was I going to find this piece of music? I didn’t even have the faintest idea of where to place it – except that it was some time after the emergence of polyphony. I barely remembered my History of Western Music – how was I supposed to then navigate this history?

It was a Sunday afternoon and I was procrastinating on a paper I was meant to be writing about John Mateer’s Orientalism. I saw on a bookshelf my old Norton Anthology of Western Music: Ancient to Baroque. There really was no other option. Fuck you, internet. I opened, thankful to be at least skipping ancient Greek and Roman notation, started at Gregorian chant and kept turning the pages. I listened as I read. I got lost in the mystic Hildegard of Bingen. I smiled at my annotated score of Guillaume de Machaut’s Agnus Dei – I once knew what a doubled leading note cadence was! And ‘DLNs’ were everywhere in this mass. I listened to the sensuous, transitional Landini, and Dunstable. I was forgetting why I’d opened this book in the first place. I thought to myself – how can this be a waste of time, consolidating these things I once knew? By the time I was up to Dufay I was well and truly gone.

Each composer brought a new world of pleasure. Josquin des Prez’s Mille Regretz, according to my notes, was ‘extremely modern,’ exploiting ‘textual changes’ and ‘manipulating sonorities’ with a ‘wider range.’ I cued the music. I cried, inwardly, at something so modern in the fall of notes. The cadences were pregnant with the infinite possibilities of the new era. There were new tensions between each voice. Yes, the music exploited the full range of voices. How exciting – would des Prez have had any idea how influential these ideas were to become? I skipped the next des Prez piece, a motet left unannotated by me all those years ago, and turned onto the next motet, a palimpsest of my arrows and ‘NBs.’ The name of the motet was De Profundis clamavi ad te. And of course I smiled in the surprise shock of recognition. I’d found it when I’d totally forgotten I was looking.

Perhaps I don’t really need to take you through the pleasures of this particular piece – you can hear them for yourself. Listen for the fabulous descent. Funny, isn’t it, how wrong my memory hints had been, even as they finally edged me into the prize. Latin, not Italian. Profundis. That was the word. And now, really, I felt that the entire line of text was apposite to my understanding of the point of Nymphomaniac: ‘De profundis clamavi ad te Domine: Domine exaudi vocem mean.’ Funny how I’d remembered ‘clamavi,’ the imperative ‘hear me,’ as ‘lasciavi,’ which is either the imperative ‘you, leave,’ or ‘you left.’ Out of the depths I have cried to you, Lord. In a way my mis-remembering is better fitted to the film: you have left me in the depths, Lord; or better, leave me in the depths, Lord. Anyway, these are some of the many pleasures of distracted memory research. I finally found the best expression for what really captivated me in the film. I’m down here.

But I really came here to talk about how things sound different at night. Don’t you know the menace of a bicycle tyre as it snakes behind you on a path? What about the creepiness of a myna bird, waking hours before dawn, when you yourself still haven’t been to bed? What about the laughter of a house party at the end of a suburban cul de sac? What about the shudder of the diesel engine of a bus, emptily turning a corner on its way to the depot? What about the brooding melancholy of lonely dogs?

One of the few sounds that sound nicer at night than during the day is the sound of a car engine starting up. Maybe I include in this also the allied sounds of last footsteps, door slams, and more recently, reverse beeper guides. This sound has always comforted me, probably stemming from some childhood happy time of the end of a long sleepover party, and later, but not much later, denoting the end of a weekend visit to my mum’s house. The sound of an engine starting at night, and its twin, the sound of an engine being cut, also at night, strike me as two parts of a supremely feminine interval. My mum, while not in the least taciturn, never had very much to say and consequently never spoke much during these night drives back to my dad’s. These drives were mostly silent, warm, essentially relaxed in their meaninglessness. I could never decide whether I preferred one parent over the other, and in hindsight I can see that the space of the car was an interval space, articulating a time when I didn’t have to wonder where I truly belonged.