Lately I’ve been reading James Baldwin’s No Name in the Street. Every time I read Baldwin I realise I really haven’t read enough of his works. I think I realise this primarily because his voice varies so incredibly from text to text. No Name in the Street is a killer sample of matter-of-fact historical account, cut through with personal turns on some serious figures – Malcolm X, Martin Luther King, Huey Newton… As often with these types of cross-genre texts (part autobiography, part political analysis, part travelogue, part wise banter) the pacing and framing are in constant flux… what I’m trying to say is that I feel so much joy to have rediscovered a master. ‘People pay for what they do, and, still more, for what they have allowed themselves to become. And they pay for it very simply: by the lives they lead.’ 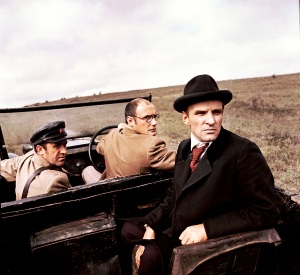 Lately I’ve also been watching some Russian cinema. At Home Among Strangers, a Stranger at Home (Nikita Mikhalkov) has to have the loftiest opening sequence in the entirety of movies. The musical number, riffing on the ideals of equality and brotherhood, sets up the nuanced interpretation of the musical genre in the narrative that follows. But to be honest I could have stood up and saluted my television after the song ended. The ironic use of the revolutionary moment was not lost on me (I think…) but there was a splendour in that scene that was just totally unexpected and therefore – my jaw dropped. You know those times when you think, ‘I’m watching the best thing ever?’ Yeah. Those are good times.

Lately I’ve had a bit of Linton Kwesi Johnson stuck in my head (probably triggered by thinking about the Black Panthers) – this is from the poem ‘New Craas Massakah’ :

Last weekend I attended a 24 hour speak-out against the government’s refugee policy. I decided to read Attila Jozsef’s poem, ‘The Seventh.’ It can feel strange, reading poetry to a non-poetry audience, but I think the organisers were grateful for the spontaneous volunteering to fill some air time. Here’s the final stanza:

It seems like these things I’ve been doing lately are interconnected – for what purpose, however, I’m not sure.